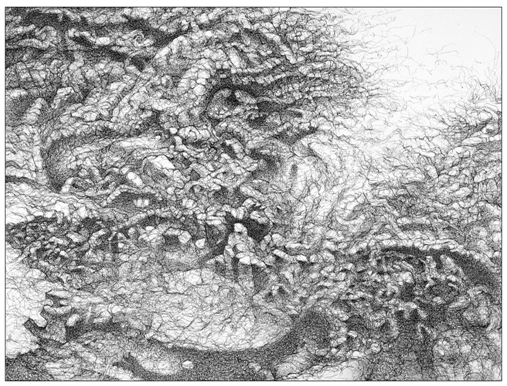 ~~~~~~
"I was approached by a group of elders who manifested in a vision during the mid-sixties. They wanted a decision from me as to whether or not I was ready to participate in a certain
project. I jumped at the chance without knowing what the project was. As it was later revealed, my participation involved image making. As life has taken its interesting and unexpected turns, my involvement with this protracted production has persisted to the point of becoming a lifelong preoccupation. I have very few notions as to the nature of these drawings, other than that they seem important enough to call for a continued effort on my part. What these pictures may mean is very much beyond my powers of comprehension and it has become evident to me that, in the scheme of things, my role in this endeavor is only that of a messenger. Any resemblance to conceptual art is purely coincidental. Artistic integrity need not apply. My only skill is to have as little as possible of an influence upon the end result as is possible. I leave you with a (message) excerpt from one of our sessions: 'As you traverse what you see as the visual divide, know that the distance between the seen and the unseen is as barely negligible as the distance between thought and language. There is no appreciable difference between sight and insight, excepting that which has been projected through your perception.'  A heartfelt thanks for inviting these drawings onto the pages for A.L.L. Hugs all around." - Michael Goodwin
~~~~~~
More artwork from Michael:

END_OF_DOCUMENT_TOKEN_TO_BE_REPLACED


"May You Be" - Lily Fraser
(Artwork by Delores Pollard)

"You are a light. You are the light. Never let anyone—any person or any force—dampen, dim or diminish your light. Study the path of others to make your way easier and more abundant. Lean toward the whispers of your own heart, discover the universal truth, and follow its dictates... Release the need to hate, to harbor division, and the enticement of revenge. Release all bitterness. Hold only love, only peace in your heart, knowing that the battle of good to overcome evil is already won. Choose confrontation wisely, but when it is your time don't be afraid to stand up, speak up, and speak out against injustice. And if you follow your truth down the road to peace and the affirmation of love, if you shine like a beacon for all to see, then the poetry of all the great dreamers and philosophers is yours to manifest in a nation, a world community, and a Beloved Community that is finally at peace with itself."
- John Lewis
(Click for Past Featured Quotes)